We are very excited to announce that Elaine Gold, founder and director of the Canadian Language Museum, is the 2019 recipient of the Canadian Linguistic Association’s National Achievement Award!

“Dr. Gold has set a stellar example of what it means to be a “public scholar” in our discipline.  Her work on the CLM has reached non-academic audiences and it has engaged the general public around issues of language and linguistics in a manner that is accessible and informative." 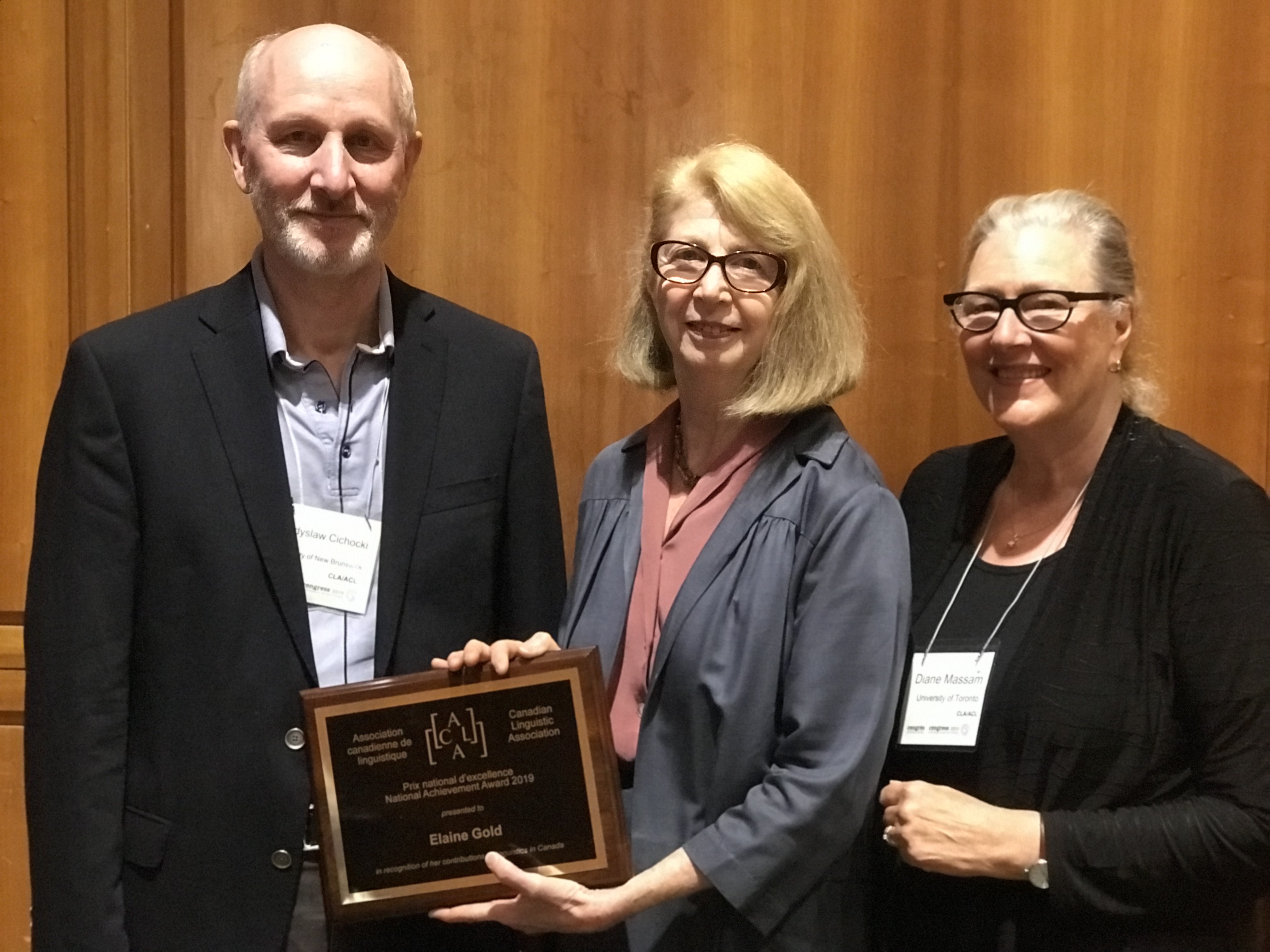 National Achievement Award, Canadian Linguistic Association - 2019
The Canadian Linguistic Association is pleased to announce that the 2019 laureate of the National Achievement Award is Dr. Elaine Gold (U Toronto). The award will be presented on Sunday 2 June 2019 during the CLA's Annual Meeting at the University of British Columbia in Vancouver, BC. Dr Gold will give a plenary talk about her research.

"Dr. Elaine Gold has demonstrated exceptional effectiveness in communication and knowledge transfer about language and linguistics. Her work with the Canadian Language Museum has reached communities across Canada, both within and beyond the university context. Dr. Gold holds an MA in the History of Art and a PhD in Linguistics from the University of Toronto. Until her retirement in 2017, she held teaching positions at Queen’s University and at the University of Toronto, where she served as Undergraduate Coordinator and Lecturer in Linguistics.

Her teaching covered a wide range of topics, and her scholarly output has contributed a distinctly Canadian focus in areas such as sociolinguistics, aspect and loan words in Yiddish, Indigenous Englishes, and Canadian English. She has made notable contributions to the now-flourishing research area of Canadian eh and to the study of aspect in Bungi, a Scots English/Cree creole that arose during the fur trade.

Dr. Gold’s most important contribution to linguistics in the public realm has been as founder, in 2011, and executive director of the Canadian Language Museum (CLM) (www.languagemuseum.ca). This unique institution has achieved a great deal for the outreach of linguistics into communities across Canada. In her work, Dr. Gold has been able to identify areas of research on languages in Canada that are of relevance to the wider public, to select researchers active in these areas, to oversee the development of itinerant museum exhibits on the relevant topics, and to manage their circulation across the country. Dr. Gold routinely recruits and mentors students from the University of Toronto’s Master of Museum Studies program, who

create and curate each exhibit as part of their graduating-year Exhibitions course. The CLM’s exhibits showcase and celebrate the diversity of Canadian English, of French in Canada as well as the many Indigenous and heritage languages spoken in Canada. The latest exhibit, Beyond Words: Dictionaries and Indigenous Languages, is occasioned by the United Nations’ proclamation of 2019 as the International Year of Indigenous Languages.

The CLM travelling exhibits have had extensive geographic coverage, criss-crossing the country from Victoria to St. John’s. These exhibits have been displayed on nearly 100 occasions to date in diverse venues, including universities, schools, public libraries, community centres, government buildings, museums, historic sites, even hospitals. Museum exhibits have been featured at academic conferences and at large international events, for instance as part of the Aboriginal Pavilion at the 2015 Pan American Games and at the World Indigenous Peoples Conference on Education (Toronto, 2017).

In 2016, Dr. Gold’s vision and advocacy resulted in the establishment of a permanent home and exhibit space for the Museum at the Glendon Gallery (Glendon Campus of York University, Toronto). Beyond this permanent location, the CLM continues to function as a virtual museum with a substantive social media presence. In 2018, it launched its first digital (web-based) exhibit, Échos de la mosaïque/Messages from the Mosaic, and produced an original documentary, Two Row Wampum: Preserving Indigenous Languages in Toronto, that can be viewed on the CLM website.

In summary, Dr. Gold has set a stellar example of what it means to be a “public scholar” in our discipline. Her work on the CLM has reached non-academic audiences, and it has engaged the general public around issues of language and linguistics in a manner that is accessible and informative. The Canadian Linguistic Association is delighted to recognize this great service by awarding Dr. Gold our National Achievement Award for 2019."